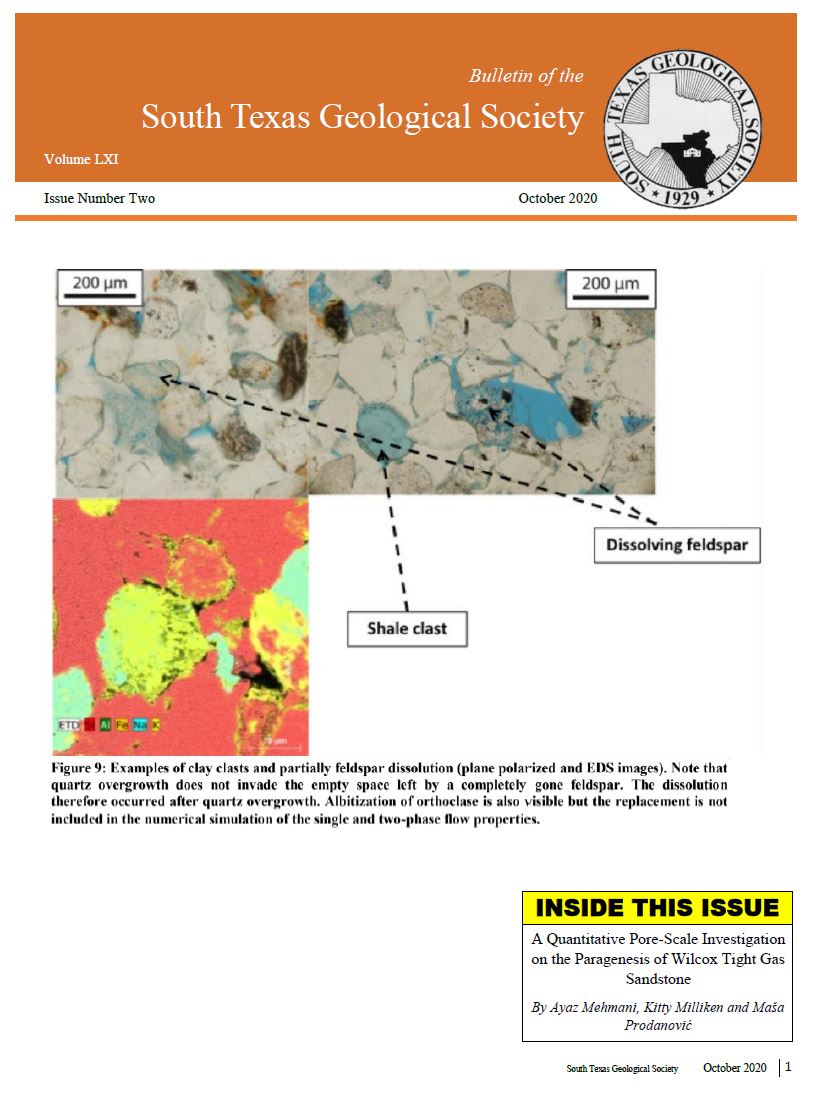 A quantitative pore-scale investigation on the paragenesis of Wilcox tight gas sandstone
Ayaz Mihmani, Kitty Milliken and Masa Prodanovic
Abstract
A process-based multiscale network model-ing approach is introduced to predict the drainage capillary pressure and relative permeability-wetting phase saturation curves at early cementation, final cementation and feldspar dissolution of the Wilcox tight gas sandstone. Predictions based on a two-scale analysis of an X-ray tomographic image are conduct-ed as well but computational limitations make con-clusions uncertain in this paper. We emphasize pro-cess-based modeling informed from thin sections as a cheap method of making a priori predictions of tight gas sandstone transport properties at various times in the paragenesis.
Introduction
Tight gas sandstone reservoirs comprise a considerable portion of natural gas production (EIA, 2014; Zou, 2012). Their development however is hindered by heterogeneous properties as well as by low permeability, and thus, there are significant un-certainties in exploration and field development. Traditional petrophysical models and reservoir pro-duction estimates can result in highly erroneous pre-dictions (Byrnes et al., 2009).
Mousavi and Bryant (2012) simulated the drainage properties of tight gas sandstone media by imple-menting cementation and grain compaction on a monodisperse sphere pack. They showed that by ig-noring the impact of a second scale pore skeleton, the simulations carried large discrepancies compared to experimental measurements. Sakhaee-Pour and Bryant (2014) conceptualized clusters of mi-croporosities as trees without the capability of trap-ping the nonwetting phase. Therefore, the greater the microporosity in a rock the lower the hysteresis in mercury intrusion and withdrawal of the rock will be. They do not however present pore-scale evidence of such a trapping mechanism.
Our hypothesis (Mehmani and Prodanović, 2014; Prodanović et al., 2014) has been that a correct pore-scale model that honors the topology of both macro – and micro scale pores in a network model can capture the various macroscopic transport properties. Our method has been deterministic in that each diagenetic process is implemented step-by-step starting from a depositional grain pack. The idea is that by acquiring knowledge of the chemical and mechanical history of the formation, one can predict the flow properties of each depositional stage a priori.
In this paper, we attempt to predict the drainage capillary pressure – wetting phase saturation curve of a Wilcox core sample. The grain size distribution, cement thickness, and percentage of grains with intragranular microporosity are acquired from the sample thin section. Figure 1 shows the flowchart of our approach.
We subsequently attempt to extract a two-scale net-work model from an X-ray tomographic image of a Wilcox rock sample from another depth. Given the computational limitations in including micropores that are 100 to 1000 times smaller than macropores, only preliminary data are presented and a more robust conclusion is left for future work.